Chlorides can be present in concrete for a number of reasons:

Until the later 1970s it was widely held that chlorides cast into concrete were largely bound as chloroaluminates and would not cause corrosion. It was then found that large numbers of structures with chloride cast into the mix did suffer from corrosion and that binding was not as effective as initially believed. ACI Report 222R-96 reviews the national standards and laboratory data. The consensus is that a chloride level of 0.4% chloride by weight of cement is a necessary but not sufficient condition for corrosion and that in variable chloride and aggressive conditions corrosion can occur at lower chloride levels, down to about 0.2% chloride by weight of cement.

A recent literature review suggested that the whether chlorides are bound or not, the chloroaluminates break down releasing chloride ions for participation in the passivation break down process. They suggested that the discussion about the amount of chloride bound in the cement paste is therefore less important than previously thought. They also pointed out that the amount of calcium hydroxide available to maintain the pH has a profound effect on initiation of corrosion. This has implications for cement replacement materials.

Chloride ingress into concrete is generally held to follow Fick's second law of diffusion, forming a chloride profile with depth into the concrete.

where [Cl- ] is the chloride concentration, at depth x and time t and Dc is the diffusion coefficient (usually of the order of 10-8 cm2.s-1. The solution to the differential equation for chlorides diffusing in from a surface is: 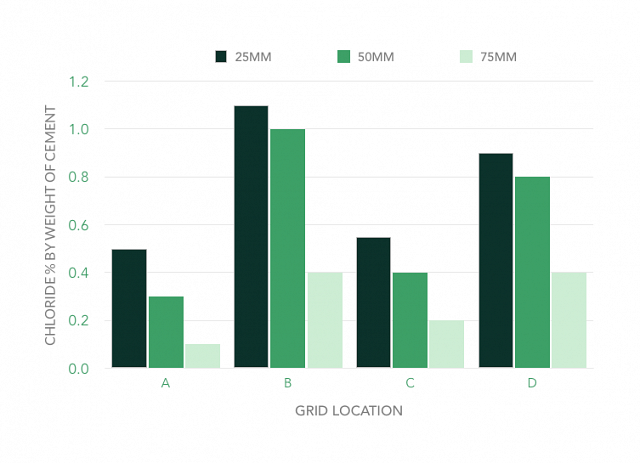 What we can do for you