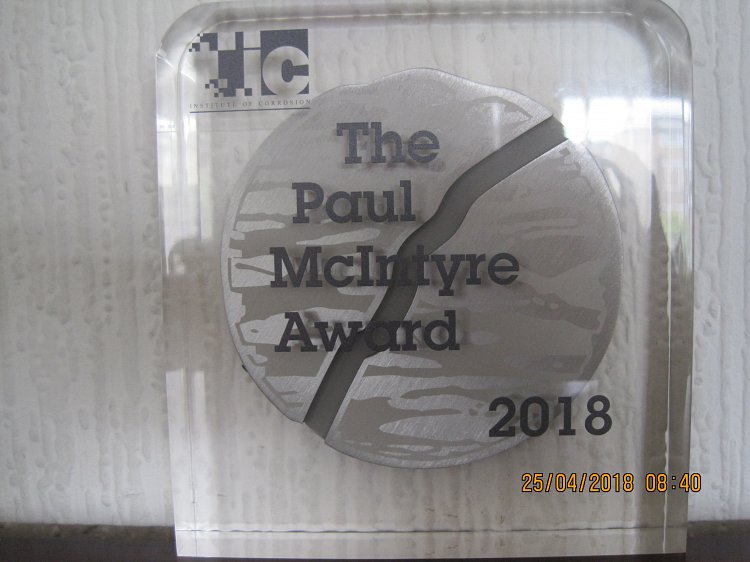 It is a great pleasure and privilege to receive the Institute of Corrosion, Corrosion Engineering Division Paul McIntyre Award.  Paul was a group leader at the Central Electricity Research Laboratory (CERL) when I joined in 1979.  He was leading a group on fracture mechanics and I worked with him and his team on grain boundary segregation using the techniques I has recently mastered in my DPhil work at Oxford University Materials Department and AERE Harwell.  I also worked on the denting corrosion problem in PWR steam generators, oxide dating as a tool for failure analysis and then on the durability of the reinforced concrete foundations of the supergrid towers.

This led me away from power generation corrosion issues to corrosion of steel in concrete and to Taywood Engineering, the laboratories and consultancy arm of Taylor Woodrow Construction, which was building the prestressed concrete pressure vessels for the Advanced Gas Cooled Reactors.  Taywood diversified into concrete durability which meant that I was fortunate enough to lead the group that designed and installed some of the first impressed current cathodic protection systems on reinforced concrete structures in the UK, Hong Kong and Australia.

I went to present my work at a NACE conference in 1987 in San Francisco.  The proceedings of the symposium on corrosion of steel in concrete were published as a book by NACE and has been on sale until recently when all papers became available on line.  On my way back from San Francisco, I stopped in Washington DC to meet the start-up staff of the Strategic Highway Research Program (SHRP), which was spending $150 million on highway research, mostly on durability and $50 million specifically on the assessment and remediation of reinforcement corrosion on highway bridges.  I ended up at Technical Contract Manager for that research and worked with some of the leading researchers and engineers in the USA and Canada working on concrete durability at that time.

On returning from the USA in 1990 I set up my own consultancy and I have worked on corrosion problems in reinforced and prestressed concrete all over the world from the National War Memorial in Wellington to a container port in Zanzibar and design and installation of impressed current cathodic protection during construction on a massive building in the Middle East.  I worked on durability modelling for reinforced concrete with the Building Research Establishment and helped in the development and promotion of resistivity and polarisation resistance meters for reinforced concrete.

I have also been active on National and International Standards bodies which I know was close to Paul McIntyre’s heart.  He and I would see each other occasionally at such meetings as CERL was closed down with the privatisation of the electricity industry.  His death in 2012 was a sad loss to the industry.

It has been an interesting career so far working with very diverse teams. The projects have ranged from early 20th century steel framed buildings such as Selfridges Department Store on Oxford Street to Spaghetti Junction in Birmingham and a recent fascinating project involving the design, installation and commissioning of a retrofitted galvanic cathodic protection system with a 50 year life on a dock wall. There have also been interesting tunnel projects in the USA and Canada and basements in the Middle East and the UK.

As a corrosion engineer I have worked with a wide range of other disciplines where corrosion does not figure very high in the curriculum, so the ability to explain the issues without using too much specialist terminology but also without being simplistic is often critical to the success of the durability aspects of a project.

ICorr, NACE and other national bodies are trying to address the problem of the lack of corrosion in many engineering degrees.  ICorr is able to offer a chartered engineering qualification which many countries do not.  I have given lectures at many universities but many are one off workshops rather than a regular feature of the curriculum.  We also have a number of very useful national and standards on corrosion and repair.  The work of developing standards goes on. I think it is important that we are familiar with them and also active in their development and maintenance so that they remain relevant and current. I am sure that Paul would agree with me.